The store will not work correctly in the case when cookies are disabled.
News
< Back To News

Can you afford to risk a chemical spill? 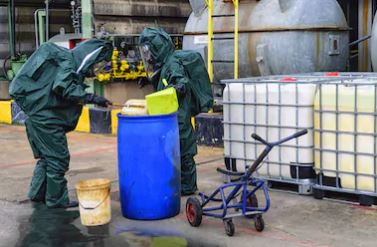 Asking how much a chemical spill could cost your business is somewhat like asking how long is a piece of string, but a quick answer is that it’s probably a lot more than you would think. Sometimes we talk to organisations which are trying to control their costs and wondering whether spill prevention and control solutions are something they need to be budgeting for. They’ll argue that the risk of a spill is minimal or that they’ll deal with it if it happens, expecting the costs to be a manageable one-off hit on their bottom line. They don’t realise that the costs of a spill can very quickly escalate and that fines can run into millions. Firstly, there’s the direct cost of the clean-up, including all the consumables and repairing the damage. Depending on the scale, or the materials involved, you may need specialist help. You could end up facing bills from contractors, the Environment Agency, the Fire Service or the Health and Safety Executive. In addition to the direct costs of a clean-up, there are other things to consider. For example, if your staff are in any way injured by the event, sick pay or compensation may be payable. Your business could be interrupted, leading to lost orders or contracts that aren’t renewed. Your hard-won reputation could be severely impacted and you could face a lot of negative publicity. The cereal giant Weetabix was hit by a stiff fine at the end of 2019 which was widely reported in the mainstream press. Insurance claims could cover some of the costs, but imagine the effect on your premiums or ability to get cover if you were deemed to have been negligent. The strongest penalties are handed out by the courts when a business is judged to have been in a position to avoid a spill. Thames Water faced fines of £20m relating to six river pollution incidents which were avoidable. So far, I’ve been talking about damage in terms of money, but the cost to wildlife can be devastating too. In one incident, back in 2014, ammonia-contaminated water leaked into a surface water drain and from there, into a brook where thousands of fish were killed. The polluter - because that’s what we’re talking about, pollution - was fined £160k plus costs. Despite the fines - and there is a possibility of jail terms - bodies such as the Environment Agency aren’t the enemy. They’re a great resource when there’s an issue that needs resolving and their expertise can help minimise any damage. But the thing to remember is that attitude is critical. A business that has failed to take its responsibilities seriously will face the most serious and damaging consequences. So how long is that piece of string? Well, a small incident could cost a few thousand pounds to deal with. A large one or a repeated one could cost millions and cripple a business. It’s vital to understand the risks, to minimise them and have plans and resources in place to deal with any spillage.
Categories: Uncategorised
Posted By: Webstraxt

Keep up-to-date with the latest legislation requirements as well as our latest products and services, to keep your business safe and compliant.